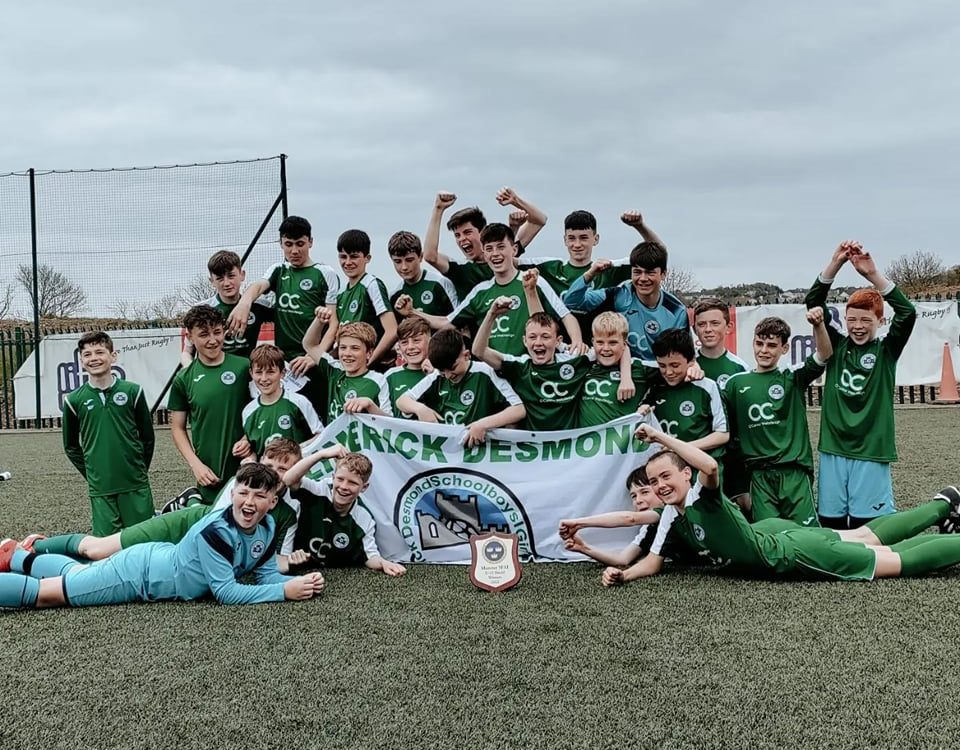 It was Munster SFAI Finals Day for our U13 Interleague boys team last Sunday where they faced off against West Cork A in the Munster Shield decider. We must firstly thank and compliment the Munster SFAI for a well organised and run event.

Limerick Desmond fresh from their semi final win at home to Limerick District started the better of the two teams, with our midfield duo of Jack O Shea and Rowan Collins getting on the ball a lot in the centre of the pitch. Limerick Desmond had a few half chances from free kicks outside the box from Sean O Flynn and Charlie McCarthy who both saw their efforts miss the target or get saved by the impressive goalkeeper from West Cork. At the other end wing back Ryan Foley who had a fine game throughout made a goal saving tackle from a West Cork attack.

However, our first half early pressure told as we hit the front, a great ball out from defence from Sheagh Mulvihill down the line to Dylan Buckley who controlled and played a beautiful through ball across the defence to strike partner Brooklyn Delahunty who calmly controlled and slotted home into the bottom corner to put Limerick Desmond one to the good. Half chances soon followed for Buckley and Delahunty who neither could turn home and make our possession pay.

West Cork pulled level with the last kick of the half; a ball not cleared by the Desmond defence fell to the Striker who buried it into the top corner passed keeper Zach Bennis. One all at the interval.

West Cork started the brighter of the two teams in the second half and their pressure paid with a cross from the right headed in by their striker and in the blink of an eye it was two one to West Cork. Soon after Desmond’s keeper Zach Bennis made a fine point blank save from the West Cork striker to keep Limerick in the game. West Cork then had a goal ruled out for offside and this is where the game turned as Limerick Desmond’s re grouped and slowly began to get back on top again in the game. Substitute Tiarnan Kelly, now on, causing a lot of panic in the West Cork defence, and before we knew it, we were level again, Kelly winning the ball on the edge of the box, playing in Delahunty who coolly shot near post for his second of the game, a goal made from hard work and finished with finesse.

Kelly then had a glorious chance to make it three two, but the West Cork keeper closed the angle well and saved. At the other end the Desmond defence marshalled by Joint Captain Cian Barry, Charlie McCarthy, Sheagh Mulvihill, Ryan Foley, Matthew Walshe and later Thomas McMahon who kept West Cork out.

Tiarnan Kelly who was now causing major panic in the West Cork defence won a free at the edge of the box, with a brilliant bit of quick thinking put his hand on the ball, played in Matthew Walshe who carried into the box and finished passed the goalkeeper which caused major celebrations on the sideline. But the job was not done as West Cork piled on the pressure with a few free kicks into the box which were dealt well by the Limerick side.

On sixty three minutes exactly, the referee, who had a fine game, pointed to the centre circle and blew the full time whistle which queued Limerick Desmond celebrations on winning the U13 Munster Interleague Shield. After the match Joint Captains Cian Barry & Dylan Buckley received the Munster SFAI Shield from Tommy Browne and celebrated in style.

Well done to the Management of Niall O’Connor, Jamie Hickey and Tommy O’Connor.