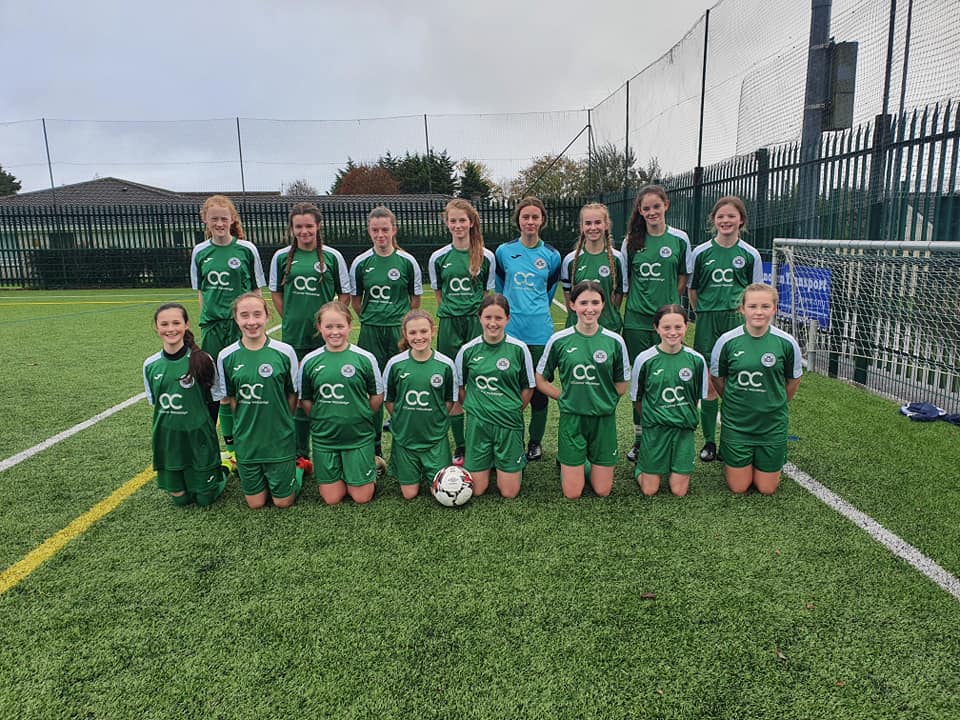 A trip to Tipp on game week four for the Limerick Desmond U13 Gaynor Girls as they played their third match of the group after a bye two weeks ago. The break done the girls the world of good as they showed great hunger from the first whistle. Played in Canon Hayes Astro in Tipperary Town on a windy wet day, it was Limerick Desmond that hit the front on five minutes, and it was Eva Loftus whose shot from distance went into the far right corner of the net. It was two nil five minutes later when winger Eleanor Blake pressed the defence into a mistake and Eva scored her second of the game. Eleanor made it three nil shortly after with a tidy finish into the bottom corner. Captain Kristina Bokmane came close to making it four nil but her effort from outside the box was well saved by the goalkeeper. South Tipperary pulled a goal back on twenty minutes when a free kick was deflected into the net at at the break Limerick Desmond were three goals to one in front.

The wind and rain didn’t stop for the second half but it didn’t prevent Limerick Desmond increasing their lead nine minutes into the second half, this time Eva Loftus completed her hat trick after the girls pressed South Tipp into another mistake. Eva brings her personal goal tally to six in the group stages. Goalkeeper Sara Mae Murphy was called upon to deal with a dangerous corner as South Tipp piled on the pressure but this pressure was being culled masterfully by the centre back duo of Mya Moloney and Emma Meaney as well as full backs Grace Fitzgibbon and Annabel Mulcair Quille. The odd time the ball got passed them Sara Mae was on hand to deal with it in goals. The ever present Limerick Desmond midfield of Jessie Meade and Chloe Wallace were now dominating on the ball in their midfield battle.

Manager Alan Loftus rang the changes in the second half, bringing Aideen Riedy, Isabelle O’Carroll, Emma Harris, Sarah Curtin and Orla Frawley on. It was Aideen Riedy who made it five one to Limerick Desmond, the substitute picking up the ball on the right and unleashing a near post finish into the roof of the net. Four minutes later it was six one and Aideen had her second picking up the ball on the far left, beating a player through her legs, and shooting from range pass the goalkeeper at the near post. There was some lovely soccer played in the last quarter of the game with the Limerick Desmond passing of the ball easy on the eye. There was still time for a couple of more chances from Aideen unlucky not to have completed a hat trick on two occasions with shots just flying wide of the post.

The full-time whistle blew to the delight of the girls who are now through as table toppers to the Gaynor Cup quarter finals, an amazing achievement that the team and management should be extremely proud of. They have one last group game left vs Limerick County in two weeks’ time where no matter the outcome of the match, they will be confirmed as group winners.