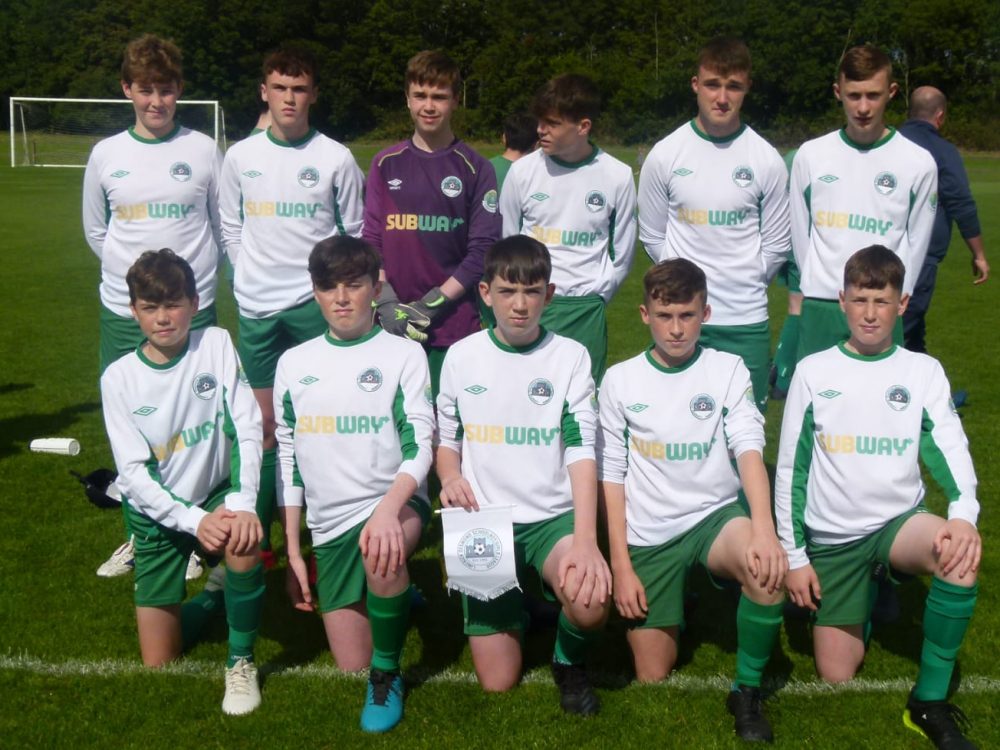 The 2021 Kennedy Cup got underway across the country last weekend and for Limerick Desmond it was a positive start with a well deserved two nil win over Wicklow at Mick Hanley Park last Sunday afternoon. Truth be told it could have been a wider winning margin for Kieran Shanahan’s charges were it not for the substitute Wicklow keeper who made saves Gordon Banks would have been proud of.

You talk about whirlwind starts, well this was up there with the best of them as inside thirty seconds Limerick Desmond were ahead. Having kicked off the ball was played back into the Desmond half before being switched diagonally out to the left to Nathan Flynn from where he crossed the ball infield to Luke Palmer who held off his marker before sending a screamer of a half volley into the top left corner from twenty-five yards. The good-sized crowd cheered in appreciation as they had witnessed one of the finest goals seen at the venue and this is no exaggeration. Buoyed by this the home side kept pushing forward but Wicklow weren’t in the mood to concede a second. However, their task became more difficult on eleven minutes when their keeper was sent off for bringing down Luke Palmer well outside the area as the Desmond striker was bearing down on goal.

The hard working Palmer instigated another move when he picked out Dan Cullen on the left and great dribbling skills saw him nutmeg a number of defenders before bringing a brilliant one handed save from the Wicklow keeper at the near post. If the keepers gloves were warm they were about to get warmer as Palmer brought a full length save from the netminder diving to his left. Wicklow’s first effort on goal was from a Sean McDonald free kick but was an easy save for Adam Collins. Cian Beirne then had a shot on goal after being picked out by club mate Palmer but it was a handy save for the visiting keeper. At times it looked like it was Palmer against the keeper as the Wicklow defence just couldn’t handle the Newcastle West town striker, this time a rocket was tipped over the bar for the save of the match. Dan Cullen then created another chance for Palmer while Billy O’Gorman was inches wide with a curling effort from distance. Half time 1-0.

The second half was played in a similar vein with the home side creating the bulk of the chances once more and the only surprising factor was that it took so long for the second goal to come. A single goal lead is a slender one at best and while Limerick Desmond were creating chances the non-arrival of that elusive second goal, while it wasn’t overly worrying there was always the chance of a Wicklow breakaway. That threat didn’t materialise with the nearest they came was a header from centre half and skipper Colm Grannell from a corner won by McDonald. Back came Limerick Desmond as the chances kept coming for the hosts. Palmer turned provider on this occasion as his curling cross from the left almost caught out the keeper who turned the ball onto the bar with Gary Donegan heading the rebound inches wide.

Donegan and Palmer linked well again for the former to bring another save from the over worked keeper while Dylan Browne had a goal bound effort blocked by a defender ten yards out. The long overdue second goal eventually arrived with Luke finishing unerringly inside the left-hand post from the edge of the area. More intricate passing between Palmer and Beirne created an opportunity for Billy O’Gorman while moments later Dylan Browne hit the right-hand upright. Full time 2-0.