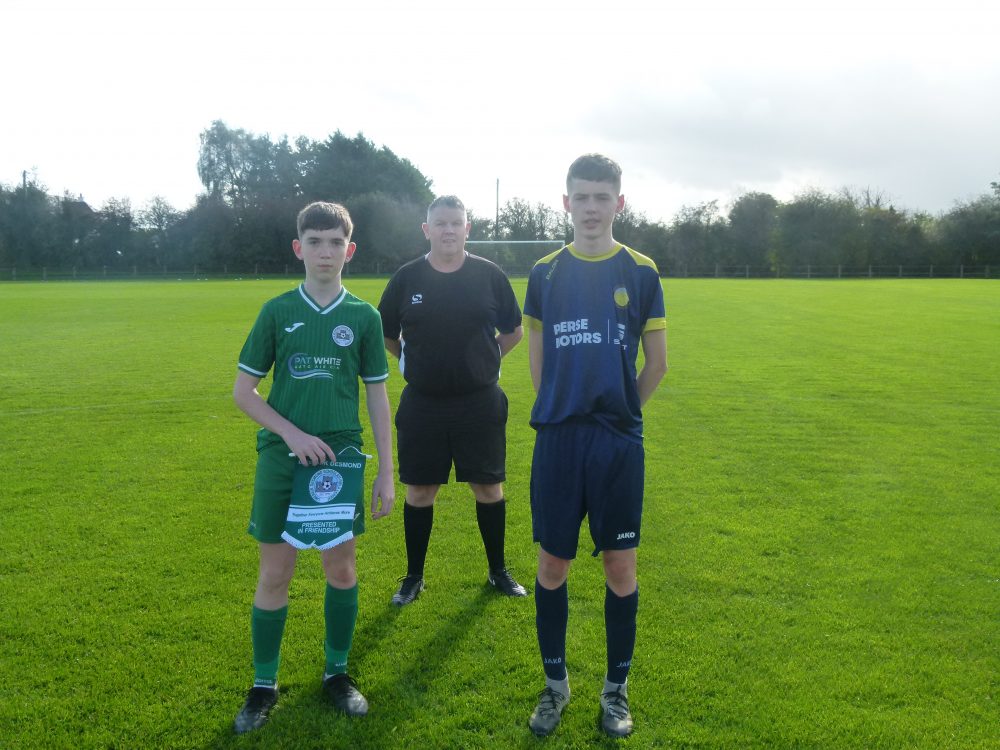 The Limerick Desmond Kennedy Cup side completed the group stages with a deserved four one win against South Tipperary last Sunday afternoon at Mick Hanley Park, Clounreask which was played on a superbly laid out surface. After the disappointment of a flattering three one win for Waterford a few weeks back in the RSC all concerned were determined to correct this. This was done with a fine four one win although there were spells in the first half where we went off the boil as the passing became loose and ragged.

The boys were out of the blocks fast and its not an exaggeration to say that we could have been four up inside the opening ten minutes. Inside a minute Luke Palmer saw the keeper turn his shot from just inside the area around his left post and moments later the same player was extremely unlucky as he flicked a header goalwards that spun inches past the post.

Tipp attacked down their right and their midfielder Dermot McCarthy came into the box and Fionn McNamara was in the right place to block the effort and clear the danger. The Desmond threat came again and Jack McMahon got clear on goal and looked odds on to hit the target only for a defender to somehow get back and only concede a corner. Eventually the pressure told and Cian Beirne was quickest to react after a teasing free kick was delivered in from the right. Jack McMahon then headed over from a Fionn McNamara corner on the right.

For some reason the game went into a lull in terms of goal chances with both sides guilty of some poor passing and it wasn’t until the closing minutes of the half that we saw the game come alive again. On thirty two minutes Tipp were given a lifeline when they were awarded a penalty after keeper Aaron Deane was adjudged to have brought down Kevin Kenny and Padraig Farrell rolled the ball into the bottom right corner. If that was a messy goal the next goal was probably worse but we won’t complain as it gave us the lead. From a set piece on the right the ball was played into the box but wasn’t cleared effectively and as the ball bounced towards the end line Gary Donegan somehow crossed the ball back into the danger area. There seemed little danger but the keeper spilled the ball and Beirne was on hand to make it two one and that’s how it stood at the break.

Five minutes into the second half we stretched our lead, and it was our number five that found the net. Having won a corner on the right the ball was played to the edge of the box where Darragh O’Carroll got his right leg around the ball and guided the ball low along the ground and inside the left post. Two minutes later it was effectively game over when we got in again, this time Jack McMahon made no mistake scoring with a nice flicked effort at the back post after the ball was played in from the right. Both sides made a few changes which interrupted the flow of the game for a while.

In general play Tipp didn’t really create any clear cut chances in the second half and the nearest they came was an effort from Levi Nolan down the inside right channel that flew across goal and just past the far post. The Tipp keeper was soon back in action to save from Finn O’Gorman and later on twice saved with his feet as we put more pressure on their defence. We saw out the game comfortably to finish second in Group D.

Limerick Desmond are now into the Bowl quarter-finals and here they could be drawn against Kilkenny, Inishowen, Carlow, Clare, Kerry, Galway and NDSL / South Belfast.