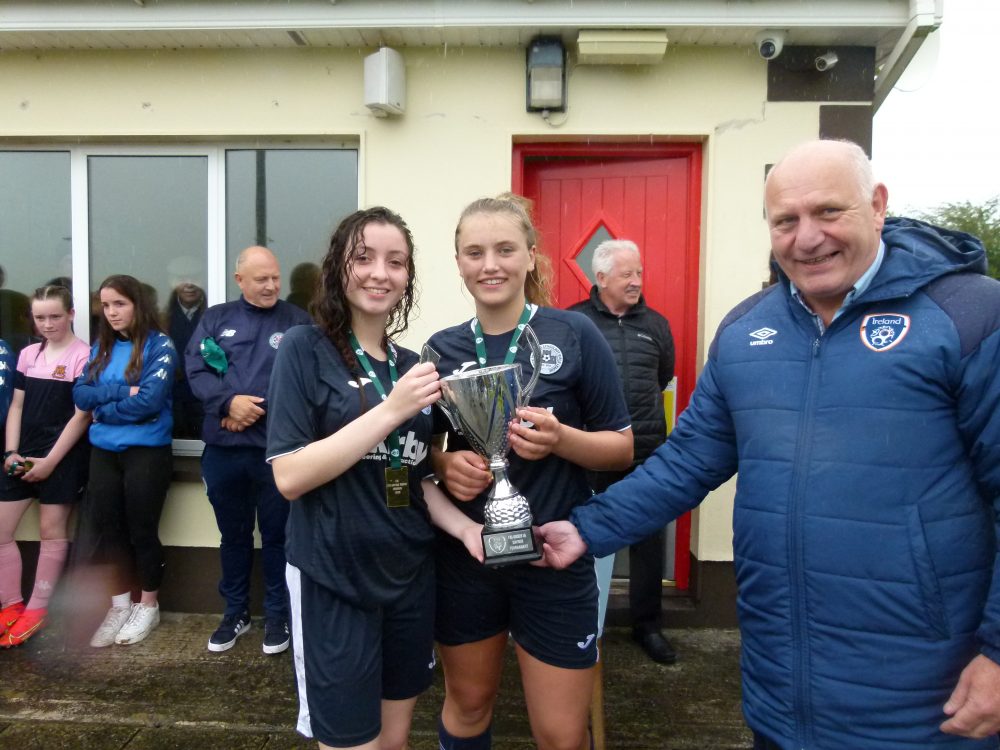 Even the rain couldn’t match the determination and skill of this Desmond side as they lifted the 2020 Gaynor Trophy with a fully merited 3-1 win over a strong Clare side. Played at Mick Hanley Park last Saturday afternoon and on a quality surface the Limerick Desmond girls won the first final under the auspices of the SFAI post covid and the first since underage girls soccer came under the SFAI umbrella. Indeed, umbrellas were very much in evidence as was the drive and work rate of the home side which led them in no small way to a great victory.

The Desmond girls set the tone from the off and within a minute Katie Lawlee and Poppy Giltenane combining down the left to win a throw the Clare defence ultimately cleared. On three minutes Clare centre forward Emer Rogers dragged her shot wide when well placed. Donna Kenny, after receiving a pass from Katie King, attacked down the right but defender Amy Lillis was able to clear the danger for Clare. On ten minutes Katie Lawlee had the Clare defence back peddling with some trickery on the left flank as the Desmond girls began to play the better soccer. Good work in midfield on fourteen minutes by Donna Kenny had her side on the front foot again as she played a through ball to Katie Lawlee who took on her marker with a run into the box and winning another corner.

On twenty-one minutes came the opening goal and not surprisingly Katie Lawlee was involved as her shot was spilled by the Clare keeper and like all good strikers should do Aine Nolan followed up to send the ball to the net. Minutes later Clare could have been level when a free kick by Rihanne Ryan from just inside the Desmond half went behind our defence leaving Faye Clancy unmarked, but her effort was well wide. The Desmond girls were attacking a lot down the left and after more good play by Katie Lawlee saw her shoot across the face of the goal. Poppy Giltenane then won a corner after her effort was spilled by the keeper before being put behind for a corner as the Desmond side finished the half in the ascendancy.

Early exchanges in the second half saw few chances being created but despite this the work rate of the Desmond side never really waned as the rain returned. Clare replaced keepers at the interval and on forty-seven minutes miscommunications between the keeper and a defender saw the ball break to Lucy Fitzgibbon who skewed her effort wide. The Desmond girls were enjoying plenty possession before a ten-minute phase midway through the second half had Clare enjoying their best spell. It was at this juncture that Clare had three very good chances, two of which fell to Hollie O’Brien, but the Desmond keeper Maedbh Nolan was equal to the challenge as was the case soon after to deny Emer Rogers.

The Desmond girls regrouped and on fifty-six minutes Poppy Giltenane threaded a fine pass to Lucy Fitzgibbon in the inside right position who shot across the keeper only for the ball to skim the far post by only inches. Two minutes later Donna Kenny picked out her club mate Lucy in an almost identical position but this time the keeper saved her effort. Moments later a combination of Hannah Clune and Caoimhe Nolan halted Donna Kennys progress on the edge of the area as a clear run in on goal loomed.

We doubled our lead on sixty-two minutes. The industrious Katie Lawlee finding herself in space inside the right edge of the area after good work by Aine Nolan and Poppy Giltenane and she finished the move by placing the ball past the advancing keeper. This gave the girls some breathing space but two minutes later Clare were back in the game when a move down their left saw the ball played behind the Desmond defence where Katie Flaherty took the ball around the keeper and score into an open net. The Desmond girls showed their worth by attacking again. This endeavour was rewarded in the last minute of normal time when the ball came to Katie Lawlee who showed great composure to control the ball and take it around the keeper and placed the ball unerringly with her left foot into the Clare net.

That effectively was the Gaynor Trophy won and in the few minutes of stoppage time the Desmond girls worked really hard to close out the game which they did effectively. The final whistle sounded to great cheers from the Desmond supporters in attendance and the joy on the girls faces said it all. Gaynor Trophy 2020 Champions.

Well done to all the girls who played their part on the day and to the girls who couldn’t play due to injuries and to those who were involved in the panel at various stages over the past few seasons. Well done to the management team of Alan Faulkner and Jason Quinn who have done colossus work over the past number of years with the squad, and this has borne fruition with a national title.

And of course, special thanks to the parents and guardians, we can’t forget them, who have taken the girls to trials at the start, and the countless training sessions, not to mention the many friendlies and matches. It has been a really tough last 18 months for families all over the country with the pandemic and its great to see young people enjoying themselves once again.

Martin O’Hanlon, Hon Secretary of the SFAI was on hand to conduct the presentations along with FAI President Gerry McAnaney. Both commended the Limerick Desmond and Clare teams on providing a really top class game of football on the day and on the growth and development withing the womens game at the moment.