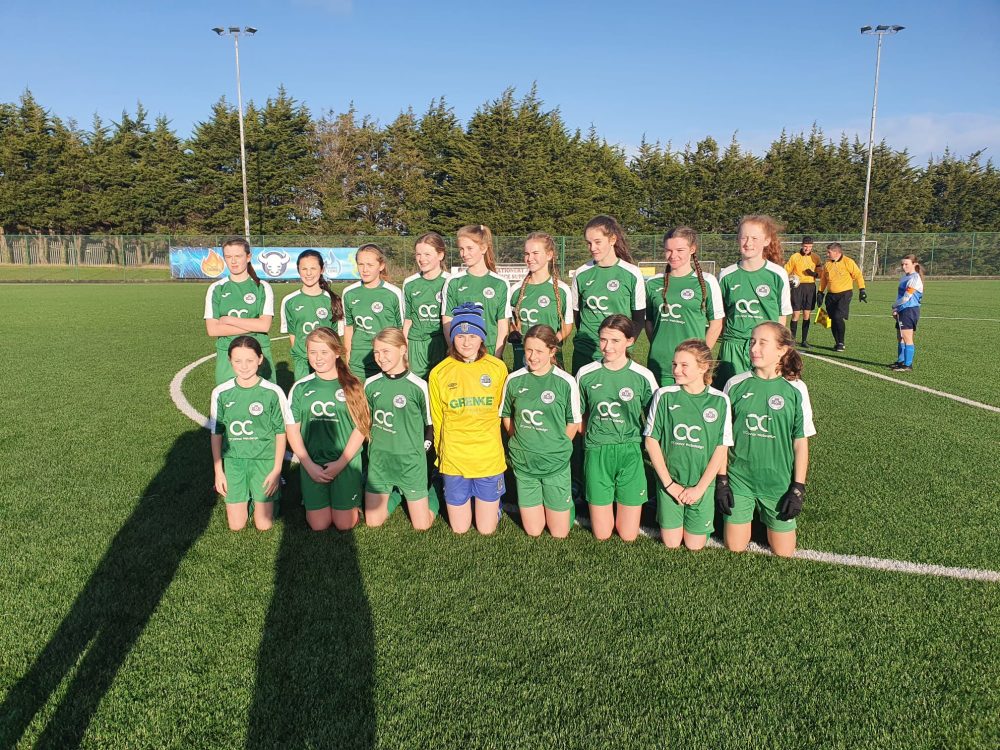 Days don’t get much better than this, A Red-Letter Day if there was ever one, our super U13 Gaynor Cup team continued their 100% record on Saturday last when they beat Metropolitan Girls League North Dublin, in the Oscar Traynor Centre in Dublin. A well organised day of Gaynor Cup Semi Finals with both South Dublin & North Dublin in 13s and 15s at home in the semi-finals. Our match was up first kicking off at 12.

Playing against the wind in the first half, certainly didn’t hamper our chances, with our midfield of Chloe Wallace & Jessie Meade getting through a lot of early work, Our defence had to deal with a few balls over the top inside the first ten minutes but the girls at the back dealt with it rather well, with Annabel Mulcair Quille,  Emma Meaney, Mya Moloney and Grace Fitzgibbon impressing in their early defensive performances, and Goalkeeper Beanne Larkin dealing with some through balls expertly on her Gaynor Cup debut.

We hit the front nine minutes from half time and what a goal it was, with the in form Eva Loftus linking up with Eleanor Blake and Madison McGuane, with Loftus picking the ball up from outside the box beating a defender and unleashing a shot from all of twenty yards over the MGL goalkeeper and into the net, four minutes later it was two nil to Desmonds with McGuane once more linking expertly with Loftus who carried the ball down the left and took another shot from all of twenty five yards which deceived the goalkeeper and nestled into the bottom right corner, This was Eva’s ninth goal of the competition, one to watch for the future for sure. Half time with the away side in dream land leading two nil in the Semi-final.

Second half kicked off, a very scrappy first ten minutes, which would prove to benefit the visitors, with Loftus and skipper Kristina Bokmane linking well on the left with Loftus swinging a cross that would be poked home by Eleanor Blake at the back post, for her third goal in as many games. Three nil after forty minutes of football and there was still more drama to come, for five minutes later striker McGuane was fouled in the box with our number nine taking the penalty herself and essentially killing the game with fifteen minutes to go.

Manager Alan Loftus brought on Aideen Riedy for her 5th appearance up front and Sarah Curtin for her 4th appearance at left back. MGL North weren’t going to go down without a fight and that proved correct when with twelve minutes remaining the got a goal back, a free kick from the right was swung into the back post where the MGL striker poked it home. Five minutes later MGL got a 2nd goal back with Goalkeeper Beanne unable to prevent the ball ricocheting passed her in a crowded box. However the goal had little meaning as Limerick Desmonds closed the game out and recorded a stunning victory and one that will live long in memory.

Having completed the group with maximum points and now beating one of the favourites for the cup in the semi-final, Sprits will be high in the camp ahead of the Final. In the other Semi-final Metropolitan Girls League South Dublin beat Donegal five nil and will be our opponents in the 2021 Gaynor Cup Final which will be held in UL next weekend.